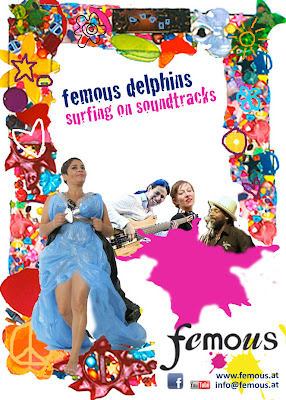 “Surfing on soundtracks” is a specially designed Gala Music Program, exploring the world of Movie, TV and Commercial Soundtracks, presenting creative compositions by the artists.

Brazilian award winning singer-songwriter Célia Mara developed together with femous director Silvia Jura a surprising show, where the borders between commercials, “hits of the century” and Brazilian Bastardsound are dissolved… Specially featured are Célia Mara’s long term partners The Snow Owl – actually one of the world best bass-Players, Courtney Jones – internationally touring Calypso percussion master and Sweet Susie, the lady on the desks…

Femous delphins is a project by femous: 360° women in music to promote the wide range of female creativity and present female artists and producers on an international scale.

Célia Mara: Brazil / Austria: She might be small, but extremly powerful! The singer with the great voice impresses with an international career; she has been performing on important festivals and venues between New York and Moscow, London and Sofia, she played for Roman Polansky as well as for Austria’s president in the Viennese Opera, she has been on top of the European World Music Charts, has been decorated with the Brazilian Export Award and got the Austrian Citizenship by Honor. Enjoy her creativity! Célia Mara is singer, songwriter, composer and producer - and, by the way, femous co-founder.

Sweet Susie: Austria: This lady got the groove: she is an Austrian DJ-Icon, co founded one of the most important clubs in the electronic world – the Viennese Dub-Club, remixed Mozart and international Jazz artists… Sweet Susie is not only a great electronic musician, but also curator and – femous director.

The Snow Owl - Juan Garcia Herreros (Columbia/USA): He’s probably one of the world’s best young Jazz Bass Players, he’s actual solo album is released by the prestigious label Blue Note in New York… In Cannes, he’s Célia Mara’s partner on stage and will present also some of his solo program. You’ll love it!

Courtney Jones (Trinidad-Tobago) – The Master of Steelpan, Calypso and Reggae… On stage, he’s like a magician, involving his public in surprising and groovy worlds. His long and impressing international career prooves that he is an amazing percussion player and drummer, giving good energy to all audiences…

Silvia Jura (Austria) – Mastermind and conceptionist, she is taking care of the whole production. Silvia is director of femous, inventor of the femous orchestra and Célia Mara's partner in all productions.
http://www.silvias.net