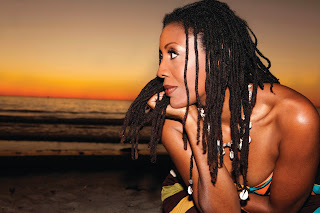 "FEMALE JAZZ VOICE OF THE YEAR"
- GILLES PETERSON Worldwide, BBC Radio 1, Brownswood Recording “Nailah is a true artist…a visionary whose music remains timeless and relevant.” - BILLY CHILDS – Grammy-Award Winning Pianist, Composer, Producer (Dianne Reev...es) “A raw yet silken cross between Sarah Vaughan and Cassandra Wilson” - LA WEEKLY Echoing along a timeless tobacco road sojourn, Nailah’s voice resonates with the spirit of her influences, Sarah Vaughan, Nina Simone, Curtis Mayfield, James Taylor, and Gil Scott-Heron.
Honoring that spirit is what moved Nailah to walk away from a lucrative career as an attorney on Capitol Hill, with the understanding that music had a far more profound effect on the human condition than any legislation she could lobby for.
When asked to describe her music, Nailah coined the phrase “ConJazzNess” (pronounced “consciousness”) – “it is rooted in Spirit and based on jazz.” Preferring to discuss what informs the music she recalls “the smell of hickory-smoked barbeque” of her hometown of Winston-Salem, North Carolina…”the feel of cotton-pricked fingers” pinchin’ her cheeks’…and “the foot stomps and African harmonies of the Elder’s Choir at St. John CME Church.”
Nailah has written songs with Guggenheim Fellow, Billy Childs, and contemporary jazz icons, Tom Scott and Jeff Lorber. Her music has been featured on the popular FX television show, “The Shield”. Nailah has also recorded and toured with various artists including Beck, Warren G, and John Cale (Velvet Underground). In 2010, Nailah was personally selected by Mayor Villaraigosa to perform at the City of Los Angeles Heritage Month opening and closing ceremonies, representing the accomplishments and contributions of African-Americans.
As the recent winner of “Jazz Voice of the Year”, Nailah made her London debut performing at the Gilles Peterson Worldwide Awards, and recording at the historic BBC Maida Vale Studios with Robert Glasper. She’s also a featured artist on the newly released Brownswood Recordings compilation CD, Brownswood Bubblers Five.
Her forthcoming CD, ConJazzNess, featuring top musicians from LA and NYC, is a tasteful blend of rural jazz and worldly wise lyricism, crossing over from its be-bop roots to neo-soul hipness.
For the record, Nailah says her music “on the surface is a blending of genres, but more importantly, it sounds like what it is…Spirit speaking to me and through me to Itself in everything that is.”